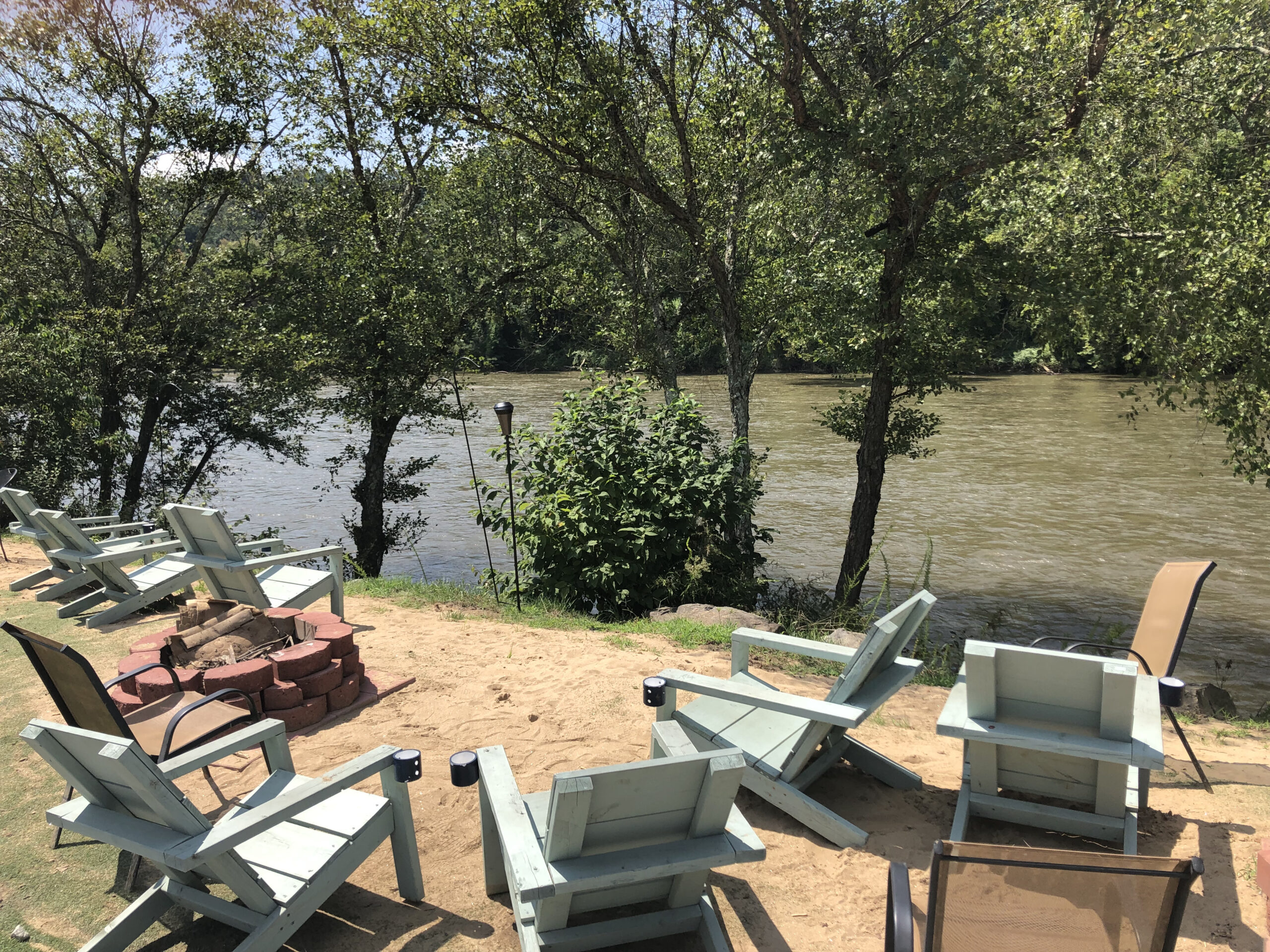 You are here: Home / Blog / Running Away From Home (Dive Bars, Salty Fish and Smeared Entrails)

As we were packing up Fish Camp for the day, the Hot Legs Comedy Show was just getting underway. The MC, an overweight, grandfatherly figure with a Santa beard and faded Hawaiian shirt on was warming up the audience on the back patio near where our mobile kitchen was set up.

The Gateway (an alias two inverted letters away from being the dive bar’s real name) is located in a no-man’s land of overgrown vegetation and neglected trash collection on the outskirts of the city.   Its saving grace is the swift moving French Broad River that marks the property’s western border.  Overturned spools that once held coiled telephone cables and comfortable Adirondack chairs line the makeshift beach, from which a rotating cast of Norm Petersons and Cliff Clavins pass joints, drink cheap beer and scarf down our (admittedly) delicious fried fish.  The stench of moldering garbage and burnt fryer oil mingles with pot and stale beer to complete the CBGB’s by the river aesthetic.  The trash itself, most of it aging detritus from years of not giving a fuck, seems like stage décor.  Like if I started picking it up, the regulars, of which there are a devoted legion, would kick my ass.

A couple days in, I told The Chef I didn’t quit the bakery to fry fish on the river.  And, to his credit, he sheepishly acknowledged my impatience and overqualifications.

“I’ve got big plans for you, chef,” he said.   “If you can bear with me. We’re about to reopen the restaurant.  In a couple weeks, I’ll need you back at Make Space (the company’s commissary kitchen) to help me create magic.”

“Remember, I want to do charcuterie, bread, cheese…work on fermentation, pickles, beer, kraut.”

“How good are you at making sausage?” he replied, throwing me a hunk of figurative red meat.

“Probably rusty.  But casing sausage is like portioning meat.   The first filet is six ounces, the next one ten, until muscle memory kicks in and you hit a consistent eight,” I said confidently.  “I’ll probably bust a few casings,  but then watch out.”

Since arriving in Asheville August first, I’ve put feelers out with the big chefs and restaurants in town.  A great talk with iconic evangelist for Appalachian roots cuisine, John Fleer, of Restaurant Rhubarb, The Rhu and Benne on Eagle, left both of us trying to figure out a way to work together.   His anecdotes about mentoring the now stratospherically revered chef Sean Brock were delicious.  And his behind the scenes historical about turning Blackberry Farm into a culinary museum of all things Blue Ridge Mountains left me stunned.   I certainly didn’t read about any of it in the glossy blurbs about him put out by the James Beard Foundation.   I found him genuine, kind, knowledgeable and still, even after thirty plus years at the top of the game, hungry for the Next Thing.  I also found him, like I find a lot of chefs these days, in desperate need of a break from the pandemic.   He wore exhaustion like a strait jacket, often struggling to finish sentences and reminiscing about how great things were “…before all this stuff started”.

A stage with Curate’s charcuterie mastermind, Jonathan Pridgen, was a three-and-a-half-hour knowing chat with a colleague.  That he’d worked in kitchens I’d only dreamt of eating in (Nashville’s Cat Bird Seat being the most jarring) and with chefs who, even if you don’t know shit, you know, like Noma’s Rene Redzepi, was beyond inspiring.  We talked the best ph for dry salami, local pork producers, curing chambers, humidity pros and cons, Jose Andres (who he’s met and cooked with), his wildly creative side projects.  Well-read and well-travelled with a Hawking-like grasp of fermentation and how it pertains to protein, Pridgen made me feel like a first-year culinary school student, as I strolled to my car covered in fat smears and dried entrails past grossed out tourists.  It was great.  I should hear something either way about the charcuterie assistant position soon.  I’m betting my sloppy sausage casing skills didn’t impress.

So now I’m at Make Space collaborating with The Chef on the next menu at soon to be disclosed Restaurant Y.  I got away from Fish Camp after a fun, but mentally taxing three week run and am doing work more suited for a jaded fine dining wonk like myself.  The Chef and I, with support from new recruit, Jennifer on prep duty, are settling into a groove.  I’m doing my best to play a humble sous chef type, but when he asks for my opinion, I insert it, often like a dagger. Unlike me, The Chef has a tendency to reach for multi-syllabic chemicals every time a sauce isn’t thick enough.  I give him shit every time.  “Just fucking cornstarch It, dude!  What did you do before molecular gastronomy?”  I opine. To which, he shakes his head and calls me an old fucker (just like Jimmy Gentry did in Memphis).

Next week is Restaurant Y’s soft opening for friends and family.  There are promises of sausage and terrine making.  I can’t wait.