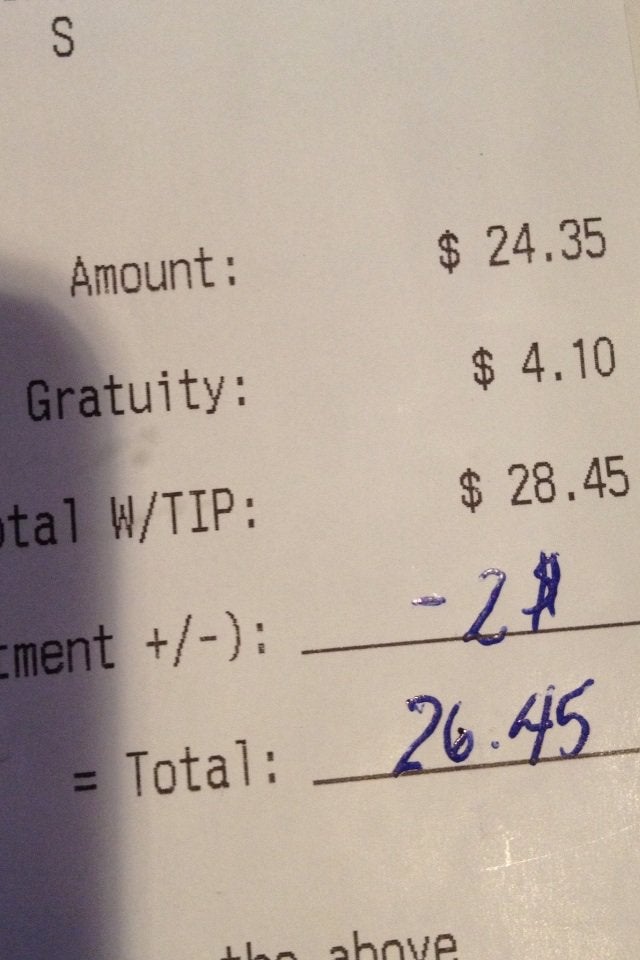 You are here: Home / Blog / Salty Words on Non-Tippers

When it comes time to pay your restaurant bill, do you instinctively default to one of these revealing gems:

‘I don’t believe in tipping.’

‘The service wasn’t that great.’

‘That porchetta tasted like shit and the cavatelli was cold.’

‘You gotta tip everyone these days for doing their job. Sheesh.’

‘It took fifteen minutes for our server to even acknowledge our existence.’ (I admit, this burns my soul).

‘The system is outdated and broken, and I refuse feed into it.’

Or are you one of the select few assholes who actually scratches acerbic commentary on the guest check?

“I give God ten percent.  Why do you get eighteen?”

Or the ever timely and poignant, “Mask on=no tip.”

Let me say unequivocally, plainly, without a lick of restraint knowing that (now) people are reading this and I could face a (silly) backlash, that you dear customer, are what’s wrong with the world.  You don’t deserve to eat the food that we struggle to produce in professional kitchens. That I work my body to exhaustion for you is depressing.  Do you not understand that restaurant workers, those who didn’t take the pass of unemployment, have been masked up, heartbreakingly serving you this whole pandemic?  Who do you think cooked, boxed up and handed you that spaghetti pomodoro you were too afraid to eat in our dining room?  Aren’t you, in some small way, grateful for not being relegated to the same three things you know how to cook?  I sometimes wish bad customers came with UPC codes so we could scan them out of our restaurants.  I’d like nothing better than to tie you, Mr. Non-Tipper, to a gurney, leave a Big Mac combo with Diet Coke (because in my jaundiced brain, that’s what all non-tippers really crave) just out of arms-length and watch you fade away into a starvation so agonizing that you cry for your mommy.  Angry? Sadistic? Off-putting? I’ll take the heat. Remember, I call my blog The Saltiest Words (not A Chef’s Corner or Culinary Travel Tips with Spencer) This is not the nurturing, all-inclusive world view of a chef here, sure.  But, in the post pandemic world that’s emerging, anger towards unforgiving customers is a biproduct of the new US vs. THEM dynamic.  And I’m starting to build up a reserve of the stuff.

The question that dangles over this whole disgusting enterprise is, ‘Since when did restaurant dining become a political endeavor?’  Why NOW—when enjoying a restaurant meal IN THE RESTAURANT had been verboten for over a year—are people coming back to the table with shitty attitudes and unsolicited opinions?  I’ve heard some say in response to this query that ‘folks just want things to be normal again.’  What does this even mean?  I think it means that people who shit on waiters are unmitigated shitheads themselves and should go back to Ramen, poorly grill steak and grill cheese at home.

At the restaurant the other night, a new, fresh faced, first-time server was stiffed on a two-hundred-dollar tab.  Yes, in her first-time-ness, let’s call her Bambi stumbled through the nine-top’s service like a toddler waving a baseball bat in a jewelry store, but a ZERO percent tip? The table, in the spirit of full disclosure,  was made aware of her virginity at the outset.  We were grossly understaffed.  Putting Bambi on the floor with minimal training and hoping for the best was Kristin’s only option.  And now, because of the callousness of some cold-blooded Yankee, Bambi is gun shy and insecure about walking up to a new table. This shouldn’t be.

Should we, as an industry, shift to an auto-gratuity scenario?  A lot of restaurants have gone there, and we might too.  But I think eventually tacking on a tip automatically is going to give shitty customers another reason to vomit their disapproval.  But at least the servers are going to get their money, so I’ll live with it, I suppose.

Are you one of the self-righteous freedom fighters who, on social media, coalesce your sycophants around the notion that ALL restaurants should pay their staff living wages?  Before I karate chop your balsawood bridge of good intentions, let me go on record as saying that I agree with you.  Especially now, after we’ve all gone through this awful pandemic, everyone in restaurants (that still yearn to provide top notch food and service) should make more than they did pre-pandemic.  But listen, my job currently, besides trying to attract foodies to the quaint, non-foodie college town of Durham, New Hampshire, is to save our restaurant from insolvency.  That means, I have my fingers on the financial pulse of the operation.  If, all of a sudden, we had to pay our servers fifteen dollars an hour, we’d quickly go out of business.

There’s a lot of acrimony out there about this.  I read comments ranging from inane to hateful on the subject.

“Yeah, well then you SHOULD go out of business.”

“Duh, just charge more. Most customers would be willing to pay more if they knew servers were getting a living wage.”  I call complete bullshit on this, of course.

“The owner(s) should be arrested.”

Without going into minute financial detail, at least in the current climate, paying everyone in the restaurant fifteen dollars an hour is NOT a viable option.  Yes, there are restaurants making strides that way and they need to continue.  And yes, bigger corporate entities with bigger profit margins can pay more—Chik-fila with their wrap around, brilliantly automated car lines, for one, needs to step up.  Their turnstile approach to service is efficient and wildly lucrative.  But that churchy, bright-eyed kid who utters, “my pleasure” when you blankly thank them into their headsets, makes on average nine dollars an hour.  To me, this is an egregious transgression.

But mom and pop independent joints?

I’ve said this before, and I’ll say it again.  After doing online research, freelance consulting and legitimately consulting with Sysco, reading A LOT of books on the subject and working in restaurants for thirty-eight years, the realization that, even at my leanest, I often times made more money as an employee than the owner became undeniable.  When you say, ‘restaurants need to pay employees a living wage’ are you automatically thinking restaurant owners are like Ray Kroc (The Founder, but not, creator of McDonald’s); devious, entrepreneurial, with hidden bank accounts and a bent for screwing people? Most restaurant owners are NOT like Ray Kroc.  Most restaurant owners are hardworking, honest, creative and in general, they care deeply about their employees (if for no other reason than retention cures chaos).  Savvy owners, if they’re all over their financials, are taking home ten to fifteen percent of gross profits.  Most restaurants, however, are barely breaking even. And if the pandemic didn’t kill restaurants entirely, it most certain killed those enormous cash reserves some ignorantly rail against. Introduce an Everyone Makes Fifteen Dollars bill into the equation and you’re making the situation worse.  Believe me.  I don’t like it.  But, until there’s a paradigm shift for the better, that’s the reality.  The immediate goal is to keep restaurants alive, right?  We will, eventually I hope, get to that place where we can all figure out the next step that includes better compensation packages for all. Let’s just get through this summer, first.  Baby steps.

For what it’s worth, the Caritas job, for which I received great praise and attention, paid thirty-five grand.  That’s all they could afford.  A year earlier, I was making a hundred and ten thousand between teaching and private cheffing for Mike Conley.  Not once did I rant about my Caritas salary.  I could have pretty easily found a fat cat salary gig again after L’Ecole closed suddenly and Mike was subsequently traded to Utah.  But I realized early on that Caritas was a mission job, that the social capital I accrued by feeding those who couldn’t themselves was much more bankable than the six hundred odd dollars that was auto drafted into my account every Friday.

Sometimes, depending on where you choose to work, you’re not going to be making bank.  Again, I hope that changes.  But I’m not holding out hope for it happening this year.  There are wonderful things about the restaurant life (read Kitchen Confidential for those) and some not so great. Being properly compensated for a hard day’s work tends to trend toward the latter.  So that argument—the fifteen dollar one—to me, is out.  And to be honest, I’m not sure what the solution to better compensation is.  After studying it from all angles, I can’t for the life of me put together a cogent action plan that would give John Q. First Time Line Cook, the ability to purchase his first home with his saute salary.  I’m still working on that.  Maybe that’ll be the next blog entry.

I implore you, post pandemic restaurant diner, to be patient and fair to those who wait on you or serve your food.  Try to look at the situation from the restaurant’s perspective.  If there’s hum of panic buzzing around the dining room, if your server tells you forthright that two of the cooks didn’t show up today or that they’re temporarily out of your favorite dish, just smile and be polite.  Did you know that the entire supply chain for your favorite restaurant (and of all restaurants across the country) is completely fucked right now?  Suppliers can’t find qualified truck drivers. Most broadline distributors are having a hell of a time even getting chicken breasts.  Chicken breasts, the single most consumed protein in the U.S., out of stock.  Chicken breasts, the new toilet paper.  The problems as we come out of this shit show are numerous and real.  What we need right now is understand from the general public.  Know going into your favorite spot after not for over a year, that employees are embattled and that things might not measure up to your benchmark experience there.  Give us time.  Let the scabs heal, the workforce be freed from the burden of unemployment insurance and new recruits get proper training.  And for God’s sake, show up ready to contribute to the greater good.  We’ve seen enough selfishness and division in the last year to last a hundred lifetimes.  It’s time to do the hard thing and get back to nurturing each other.  Think of what a great recovery that would be.