You are here: Home / Blog / Running Away From Home (Ciao Trattoria and Wine Bar) 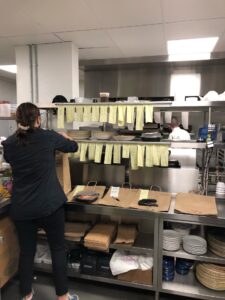 As I sit here wracked with pain; in my legs, my back, my head, shoulders, forearms, even my eyeballs and my temples, I feel equal parts relief and dread.   Kristin and I just ran the gauntlet, bouncing back and forth between a crush of eager customers, a few disgruntled ones, and a hastily thrown together kitchen staff who, by their own admission, feel as beleaguered as I do.  The first weekend of our new restaurant Ciao Trattoria and Wine Bar was a huge success financially, but if we don’t get more staff pronto, this gig could be my last.  At 51, after 38 years of giving everything to the line, I’m headed toward the glue factory.

So how did we get here from where we were three weeks ago.

To wrap the ugly thing together with a pretty bow, I’ll give you the Cliff’s Notes version of the story.

Things were not going well at Ciao Italia financially.  With a lumbering, old school mentality, and food better suited for a continental restaurant circa 1992 (do we really have to call it “deconstructed eggplant parmesan”), the ship was listing to the side.  At the beginning of the year, the existing general manager was fired, leaving Kristin to take her place.  I won’t go into details (there is a chance of legal reprisal) but I will tell you, Kristin has improved every facet of the operation in short order, from the desserts to the website to dining room aesthetics and morale of the waitstaff.  The last GM was more prone to casually watching the bow dip into the icy waters than lifting a hand to bail water.  She was woefully stuck in the 90s just like the food.  She seemed more than willing to be Captain Smith going down with the ship into the cold abyss.  Ciao Italia needed fighters and she was a bystander.

If you look at our menu online at www.ciaodurham.com, there is a disclaimer embedded therein.   The Matriarch (food television deity Mary Ann Esposito) and I had what some might call a falling out.  I think the decision to cut her out of the picture was more financially motivated than based upon my insistence that she needed to go.  But I’m not sure.  After receiving unnecessary criticism about my food (the focaccia was correct but didn’t have enough crunchy sea salt and rosemary on top; the porchetta was a dead ringer for her Italian benchmark, but the mostarda was too “vinegary”) I cut off communications. I understood the unspoken.  She liked the last chef better. It was obvious.  Chef X was a docile, yes chef kinda gal.  And I was an interloper from The South with a big mouth and opinions.  The Matriarch wasn’t ever going to accept me in the role as spokesperson for her brand no matter how well I cooked.

The disclaimer makes it clear that Mary Ann wants nothing to do with Ciao Trattoria and Wine Bar and to be honest, I’m glad it’s there.  I don’t want her getting credit for the success.  Spiteful? Damn right.  I know reading that feels like sour grapes, like insulting granny or Julia Child.  Maybe I’ll feel differently after I get three straight days of sleep. Right now, exhausted and sore, I want the glory for me and Kristin.  Because the former Matriarch’s lawyers are all over this falling out, I’ll refrain from digging a deeper hole for myself.  But there’s quite a bit more salacious stuff in the Ciao Italia grave.  Maybe it’ll find its way into the memoir that I’m thirty-five pages into, or into the next post.  If I don’t die on the line first.